Growing up as a Jew in Puerto Rico, I never realized that Jewish food was a cuisine driven by economy. As it turns out, the genius of our great grandmothers in Russia and Europe lay in taking extremely cheap and undesirable cuts of meat and transforming them into hearty and deeply satisfying dishes. Using this moist and slow-cooking Braising technique, delicacies such as Brisket evolved.

Thanks to Braising, today we enjoy (both kosher and non-kosher!)delights such as Beef Stew, Short Ribs and Pork Shoulder.

Braising involves browning an ingredient and then cooking it in a small amount of liquid, covered over low heat to slow cook. 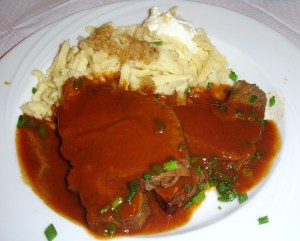